The Complete Review of the Sony Xperia Pro-I 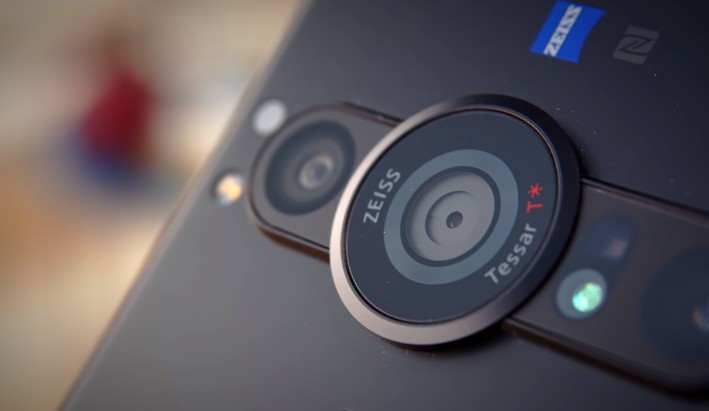 The Complete Review of the Sony Xperia Pro-I –

Sony’s latest flagship, the Xperia Pro I, is all about the cameras.

let’s have a look at the Sony Xperia Pro I in our comprehensive review.

Many recent Sony phones have had roman numerals in their names, but that isn’t the case here; instead of a mark 1, this phone has an eye for image, since it is geared towards photographers.

The Sony Xperia Pro is composed of gorilla glass and features a tall rectangular form factor with a black finish that is characteristic of Sony phones, but it distinguishes apart because to its symmetrical camera configuration.

Another excellent detail is the layered waffle-like pattern on the thick metal frame, which offers a lot of grip.

Also on the frame is a mechanical shutter button, something we’ve seen on every iteration of cameras.

It’s been redone this time and is much more responsive generally the xperia pro eyes built is extremely robust.

Pressing it down halfway will focus and a full push will snap the photo.

It has an ip68 rating for dust and water resistance, as well as gorilla glass front and back protection.

The screen on the xperia pro I is the same as on the xperia 1 mark iii: a tall 6.5-inch oled with 4K resolution and a fast 120hz refresh rate.

During typical usage, the 4k title is a little deceptive, thus the display will most likely default to a lower 1096 by 2560 resolution. 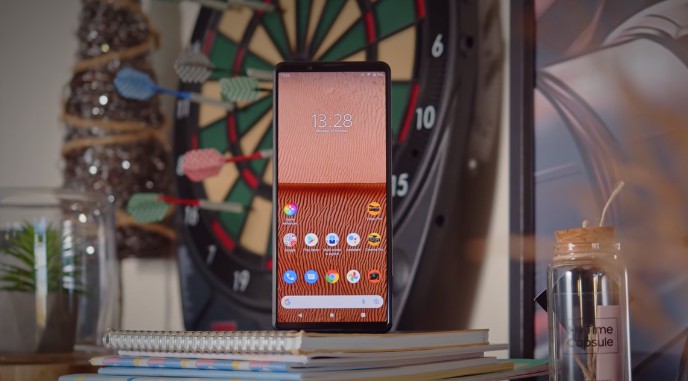 The quality of this screen is flagship grade as you’d expect there’s hdr support and 10 bit color depth it would also work in certain apps but it’s never clear which ones and with what type of content but regardless of the resolution there’s support for the high refresh rate which smooths out your swiping and scrolling there’s also support for high frame rate gaming but little in the way of adaptive switching to save energy Colors may be quite realistic depending on the color mode you choose, and there are several choices for adjusting them.

The maximum brightness is a little tough since the phone will enhance the brightness inside some applications like Google Photos if you’re in the creator color option.

Outside of those, we tested 400 nits maximum with a slider and bump up to 580 nits in auto mode when in bright situations.

You get an always-on display for your time and alerts, but the biometrics are handled through a side-mounted fingerprint reader for audio.

The xperia pro I sports a standard headphone jack as well as a pair of front-facing stereo speakers that enable Dolby Atmos. 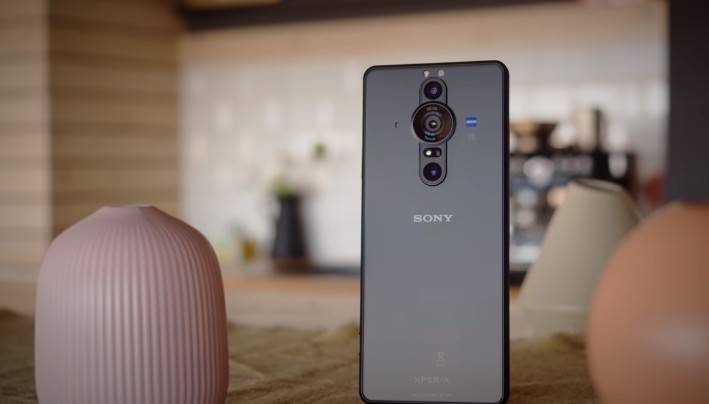 The speakers aren’t the loudest around, and the sound quality is decent, but we’ve heard better mids from other recent Sony phones.

There’s a lot of storage on board for your media and camera recordings 512 gigs, and it’s expandable on top of that too.

The xperia pro i’s chipset is the high-end snapdragon 888, which you’ll find in the top flagships these days.

The home screen itself is somewhat plain, although it does have a few Sony-exclusive functionality and applications.

The multi-window switch is very cool; it’s effectively a double task switcher for your split screen.

There’s a side sense bar you can touch for shortcuts.

There’s a game enhancer that functions as a center for your games and gives you a lot of choices, such as performance settings and high-resolution power management.

The variable aperture adjusts between f 2.0 and f 4.0, and it’s manual rather than automated, so you’ll have to turn it on to get the appropriate aesthetic impact.

Aside from the primary camera The xperia pro I has a 12 megapixel ultra wide camera with autofocus and a 2.1 times telephoto camera, both with autofocus.

There’s also a tof camera and a color spectrum sensor.

Let’s start with stills from the main camera, which are very good with a flagship worthy level of detail that comes off as natural looking thanks to more laid-back processing there’s less applied sharpening here than you’ll see on other competitors.

The subject separation is excellent, and the overall impression is fairly convincing.

The performance of the ultra wide camera is decent; its images are clear and detailed, with a broad dynamic range and colors that are similar to those of the primary cameras.

The telephoto cam’s 2.1 times zoomed shots are also good, with excellent sharpness and detail, a wide dynamic range, and colors that are similar to the main cams.

If you’re looking for an alternative to the front-facing camera for selfies and vlogging, Sony has you covered with its dedicated vlogging accessories, which include a monitor and bluetooth shooting grip and let you to see yourself and shoot while looking into the back cameras.

If you use the vlog setup to take selfies, the quality is obviously much better because you get the benefit of the main cam’s higher detail and dynamic range as well as the natural bokeh effect from the shallow depth of field, but the main purpose is for article recording, and the shallow depth of field and great stabilization work really nicely for your vlog the controls and playback options are a different story though you can find out more about these vlog accessories in our dslr accessories section.

The actual item quality from the primary cam is okay, but not extraordinary, which is a bit of a letdown from such a high-profile equipment.

With the article pro app, you can record in 4k at 120 fps, which has less detail but gives you the same excellent colors, fantastic dynamic range, and a slo-mo look if you play back at a lower frame rate.

4k article from the telephoto cam is outstanding as well, with superb sharpness and detail, broad dynamic range, and pleasant colors, and 4k footage from the ultra wide cam is great as well, particularly for this sort of camera.

We would even argue that you get more resolved detail here than with the primary cam.

On all three cameras, electronic stabilization is supported, as well as up to 4k resolution at 30 frames per second.

Walking-induced tremor, as well as motions caused by wind and panning in poor light, are handled admirably by eis.

The primary camera on the Xperia Pro Eye performs a nice job with this article recording, preserving a significant level of detail in the dark and providing acceptable color saturation.

However, the dynamic range is a little narrower than other rivals, and there is obvious noise.

The super wide cam’s nighttime article recording is not its strong feature; it performs poorly when compared to other flagships.

The telephoto camera does a decent job in terms of detail at night, but the footage is still soft and noisy.

So that’s the Sony Xperia Pro i.

It has all of the flagship features you’d expect from a Sony phone at this price, including a durable build, high refresh rate 4k amoled stereo speakers, and a flagship chipset, plus the unique main camera and advanced article recording options.

However, despite the hype and price tag, the Xperia Pro Thank you for watching, folks, and we’ll see you on the next one.